Yes, it takes time and patience but if you fancy having a go at making your own marmalade, this recipe is a winner! 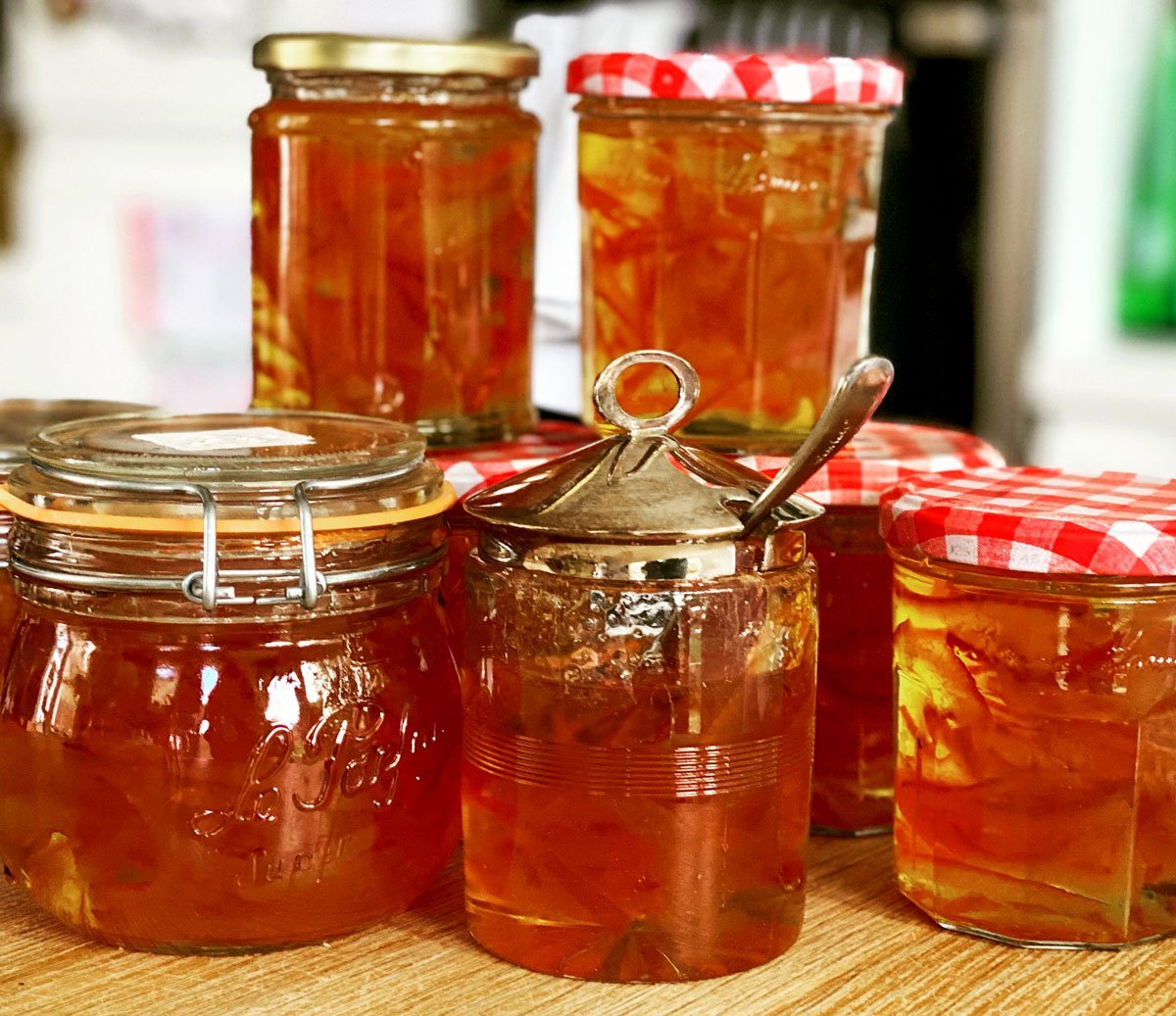 Traditionally marmalade is made in January and early February because that’s when Seville oranges (which are used for marmalade) are in season.

I use “whole oranges” in this recipe (which might upset the purists) because the children can easily take on the duty of chopping the fruit as it is so soft.  Just don’t expect to win any prizes at a village fete for evenly sized peel!  And, of course, an adult should be in charge during the cooking times, especially once the sugar has been added, as the mixture is very hot.

You will also need a big saucepan, piece of muslin or clean piece of cloth, a length of string and sterilised glass jars with lids. (This recipe makes about 6 x 450g jars.)

1. Wash the oranges and remove the ‘eyes’ and any stalks.

2. Put the whole oranges and water into a large, wide saucepan.  Pop a plate on top to stop the oranges from bobbing to the surface of the water and then put on the saucepan lid.  Bring to the boil and then let it simmer until the oranges are soft enough to cut with a blunt knife.  This will take about two hours. Leave the mixture – water and oranges – to cool.

3. Remove the oranges from the water and chop them in half.  Scoop out the insides.  Put the pips to one side (don’t throw them away) and return the flesh to the water in the saucepan.  (Do not throw the water that you cooked the oranges in away!)  Cut the peel depending on how you like it – some people prefer ‘thick cut’ and some ‘thin cut’ and some prefer long slices and some prefer chunks.  Though, to be honest, as this is when the children are involved, I take what I am given on the basis that it will all taste the same!  A top tip is to put a chopping board into a baking tray with sides for this stage to keep the mess and juices contained!  Pop the chopped peel into the saucepan.

5. Bring the marmalade to a simmer and add the sugar.  Stir until the sugar is dissolved.

6. Pop some saucers in the freezer.

8. When you are ready, remove any scum from the surface of the marmalade and carefully (everything will be VERY hot) remove and squeeze the bag of pips with a spoon against the side of the saucepan.

9. Stir and start filling the jars.  Remember, it is very hot so do this carefully.  I transfer the marmalade into a jug and then pour it into the jars – it makes a very satisfying noise.  Go slowly so that the jars don’t overfill.  Screw the lids on top (I use tea towels to do this as everything is so hot) and put to one side.  Leave to cool.

10. The marmalade will keep like this for at least a year and makes a great present!

**Always check the ingredients of any food you’re cooking with to make sure it doesn’t contain something you or your child should avoid.